In November of 2005, I watched the reversal of the national housing inventory trendline. The housing industry didn't believe it was happening until six months later, when homebuilder stocks crashed. The subprime lenders didn't believe, either, until their stocks crashed after another six months. And the entire country didn't really believe any of it until 2008 when the cascading forces of reversed feedback built to undeniable levels and the Great Recession began.

My prediction for late 2013 is that the Big Data industry won't believe it has reached saturation level, either, until late 2014, and the economy as a whole won't react until the demographically-induced slowdown for 2017 starts to kick in. So I imagine Big Data will maintain momentum until sometime in 2015.

Here's what each individual data-miner sees. Yea! "And up from the ground came a-bubbling crude!" I know because I thought the same thing in 1995.

And here's what's really happening. There's only so much money to be made from information and I'm still amazed that people rarely believe it. Real opportunities via information probably inflected during the 2001 Dot Com crash, but that means the rate of growth slowed, not that it reversed. But the great, fast rush into Big Data is probably an additional indicator of declining rates of opportunity.

I first noticed the trend reversal earlier this year using Google's Trends tool, although I've been expecting it. Until the third quarter of 2013, the sharpest reversal in Big Data's trendline was the Federal sequester in the first quarter.

And now it's marginally confirmed by Indeed.com through job listings (which I also expected), although denial can run deep and Big Data jobs may stall out for many months instead of outright crashing. There may be no crash at all, but at this point, I think it's the percentage bet. 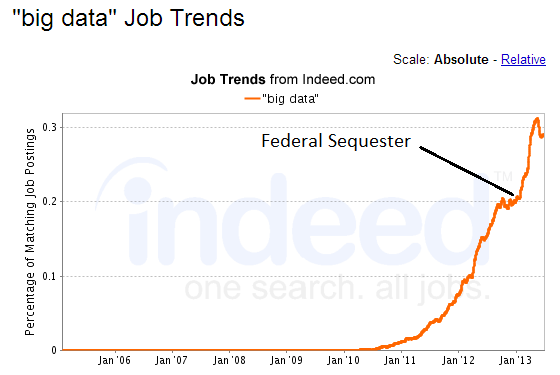