The S-curve describes a growth pattern of new products, organisms in nature, etc. When a new ecological niche appears, the growth rate of filling it increases exponentially until the inflection point, the point at when (roughly) the niche is half filled, at which time the growth rate begins to fall.

Look at the Dow Jones Industrial Average since 1975. The 2001 Dot Com crash could be the long-term inflection point for technology, which might explain why many high-tech companies never recovered their pre-crash growth rates or stock valuations.

Saturated industries often consolidate for vertical integration. Large companies buy smaller competitors, and they also purchase their vertical supply chain to reduce costs and manage dependencies. A classic example is the American car industry, which went from 1500 companies to today's Big Three (and the occasional glitch like Tesla). 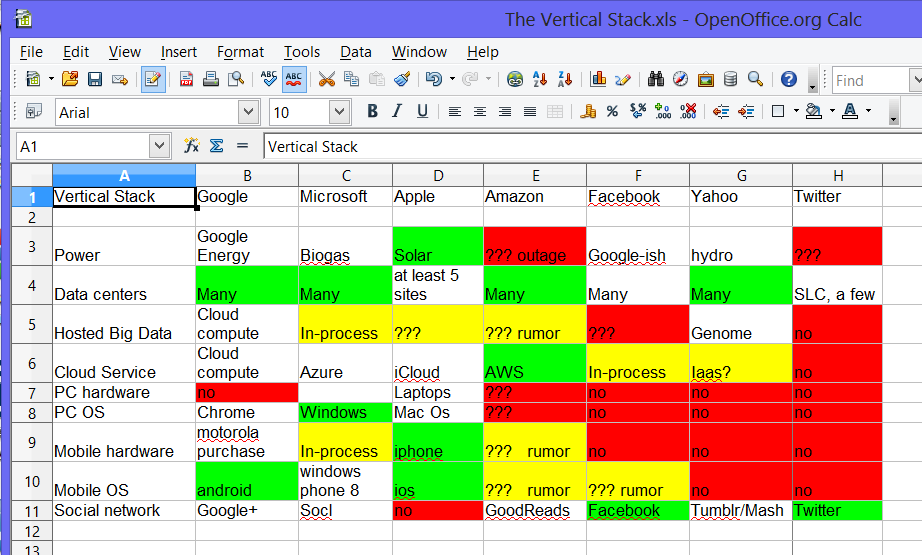 If the IT industry is post-inflection, then vertical integration might be happening. This spreadsheet defines the "Vertical Web" as power production, data centers, etc, up to consumer devices and software.

Legend - green is a strength, yellow is a weak area, red is an ignored area, based on my opinion after a couple hours of research and two decades in the industry.

If a mature industry can support three or four major players, ther are some interesting predictions: