In 1994 I read Buddhist Economics for an ethics class but it was many years before I understood it. In 2005, I was monitoring the housing industry for recession indicators and in late 2005, I saw the home inventory trendline reverse, indicating a slowdown in home sales. 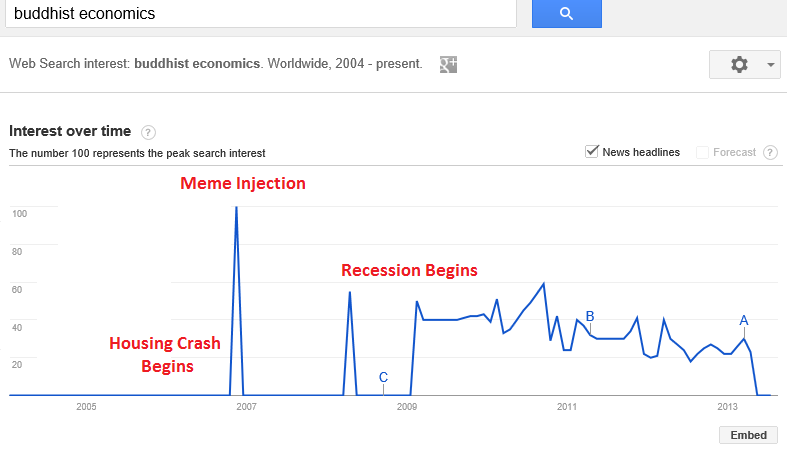 In 2007, Naomi Klein's book, "The Shock Doctrine" was released and I realized her concept of societal change through economic shock was similar to mine for "diffraction", memetic manipulation (i.e. theory on how permanent re-allocation of mental bandwidth occurs)

I nicknamed it "The Big Ping".

I seeded the initial meme through two economics sites, CalculatedRisk and Nouriel Roubini's site, reaching 100-150K readers. As you can see from the Google Trends graph, the concept worked (probably. cause and effect are tricky things) and the recession triggered an additional 2 to 3 million readers, a 20-fold multiplier. But I think now that multiplier of 200 was needed to create a permanent trend.

I believe that Buddhist Economics is a natural evolution of classic economic theories. I've learned memes are often a matter of timing for something already fated to happen. You can speed up or slow down trends but the final outcome is often pre-determined by culture and history.